An Overview of China’s Pharmaceutical Industry

China is the second largest pharmaceutical market in the world

With China’s expanding personal income and the growing medical needs of its aging population, its pharmaceutical market has become the second largest in the world. IMS Health predicts that global spending on medicines will reach around USD1,300 billion by 2018, a 30% increase over the 2013 level. During 2014-18, the compound annual growth rate (CAGR) on medicines spending will be 4% to 7%. China had a spending level of USD77.2 billion in 2012, which accounted for 8% of global medicines spending. It is forecasted that China’s spending level will reach USD155-185 billion in 2018, which would be the highest among emerging pharmaceutical markets. The key drivers for growth will be healthcare infrastructure improvements, increased access to medicines, and increases in the number of private hospitals. 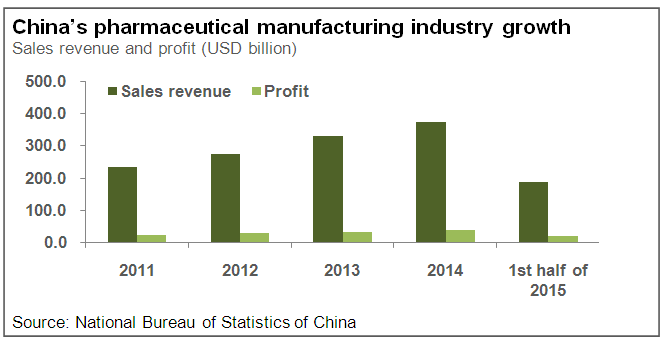 The pharmaceutical industry is fragmented

The Chinese pharmaceutical industry is very fragmented. The top two pharmaceutical companies together only occupied a small portion of market share, a notable contrast to the US market. Moreover, aggregated revenues for the top 100 pharmaceutical companies only accounted for 27.1% of the industry’s total revenue. In 2013, SMEs experienced rapid growth and 6 more SMEs received USD0.81 - 1.61 billion (RMB50-100 billion) compared with 2012. Another notable observation is that some traditional Chinese medicine manufacturers, such as Guanxi Wuzhou Zhongheng (87%), Chase Sun (70.2%) and Shijiazhuang Yiling (50%), recorded significant year-on-year revenue growth.