The Chinese coal industry is facing a challenge arising from the long term control of the electricity price. This is due to coal being the major resource used in power generation in China. In order to provide a stable electricity price to consumers, the PRC government has closely monitored the volatility of the coal market price. In Dec 2012, China's state council announced it would reduce the stringent monitoring of the coal and electricity dual-pricing system. The major coal producers and government have agreed to take the Bohai-rim Steam-Coal Price Index as the reference for the coal price for power generators. This places a limitation on the development of coal enterprises in China. Maintaining a healthy environment for the coal enterprises to survive has become a controversial and important issue for the industry participants and Government to explore. The coal industry is a traditional industry in China and has played an essential role in economic development and a key role in the supply chain of China. However, this industry has already entered its mature stage and it is difficult to make a great change in the current stage. The Government plays an important role in the development of the coal industry because the industry needs strategic support and guidance from the Government.

Coal Import and Export Trends since 2011

In contrast to import changes, China's coal export has been decreasing over the past 2 years. In 2012, only April, May and December recorded year-on-year increase of monthly coal export. On a yearly basis, the total export quantity was 14.65 million tons in 2011. In 2012, the total export quantity was 9.12 billion tons and the decrease rate was 37.7%. In the first three months of 2013, the year-on-year monthly change rates were -27%, -55% and -20%, respectively. 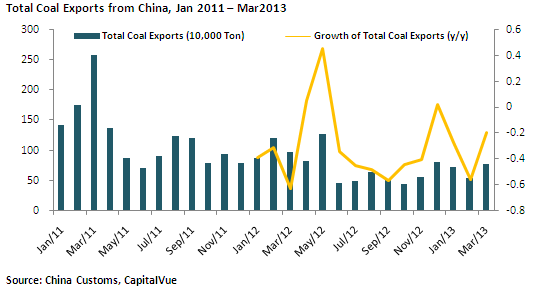 The Controversy on the Importation of Poor Quality Coal

The importation of coal from other countries into China has been growing rapidly in recent years. However, there is also a large amount of poor quality coal, with low heat value, high sulfur and high ash content, imported into China too. China is the biggest coal consumer in the world and it has been a net coal importer for four consecutive years. Its coal import quantity accounts for 95% of the world's total coal trade. According to statistics from Chinese Customs, the imported quantity of coal increased from 40.4 million tons in 2008, to 289 million tons in 2012. In the first four months of 2013, the import quantity was 110 million tons - 25.6% more than the same period in 2012. However, a large amount of poor quality coal has been included in these imports following the growing demand.

Currently, poor quality coal largely comes from Indonesia and Vietnam. The heat value of most Indonesian coal is lower than 4,500Kcal/kg. For the coal with a heat value higher than 4,500Kcal/kg, there is a large proportion of coal with higher than 1% sulfur content. Coal imported from Vietnam is mainly series 10 or 11 with ash content greater than 25%. Statistics also shows that the import quantity of brown coal (lignite), a type of lower quality coal, is also increasing. The import quantity of brown coal has increased 9-fold in the past 3 years. In 2012, the quantity of brown coal imported into China was 53.31 million tons - accounting for 18.6% of total coal importation. The China coal industry is undergoing a "winter" period. The increasing quantity of imported coal coupled with an abundance of poor quality coal in the marketplace makes the situation even worse. The Bohai-Rim Steam-Coal Price (BSPI) has decreased for 6 consecutive months. Shanxi, a big coal producing province, recorded a profit of RMB6.5 billion in the first quarter of 2013; however, it is RMB4.8 billion less than the same period last year.

The Conflict between Coal and Power Enterprises

Although the coal price has been consistently dropping, large coal enterprises do not limit their production of coal nor stop the production line. The national overall coal production only dropped slightly. The National Energy Administration is planning to implement a policy dealing with the import of low heat content coal to alleviate the plight of local coal enterprises. However, this plan has encountered objections from the various power enterprises; thus, there is a conflict between the coal and power enterprises concerning the implementation of restrictions on the import of low heat content coal.

According to the China National Coal Association, local production of coal during January 2013 - April 2013 was 1.15 billion tons. Compared with the same period of last year, the production has decreased by 23 million tons (2%). However, as a result of several factors, such as low demand and increase in import etc, the amount of coal in reserve is 292 million tons (greater than the normal reservation by 150 million tons). In response to this situation, the National Energy Administration has summoned representatives, from both coal and power enterprises, to a conference concerning the "Temporary measure on commodity coal quality management" which restricts the import of coal with heat content lower than 4,544Kcal/kg, sulfur content higher than 1% and ash content higher than 25%. It will also require coal import enterprises with a registration capital of RMB50 million or above, with trading quantity of 1 million tons or above in the previous 3 years, to have a stable working place and have facilities and storage areas corresponding to its trading quantity. If this measure is implemented, it will alleviate the coal enterprises' plight and increase electricity price. Therefore, it is objected to by 5 big power enterprises and the Shenhua Group.

Shanxi is a big coal production province in China and is therefore a victim of the recession in the coal industry. The quantity of coal production and revenue has decreased significantly. During the first four months of 2013, the profit of Shanxi's coal industry has decreased by 70%. Two reasons for this are Shanxi's difficulty to sell coal to the domestic market in other provinces and the consequences of the inflow of overseas coal as well as competition from other Chinese provinces.

Other provinces, including Henan and Shandong, have launched a "Coal-Power complementary policy" which is biased toward these provinces' local coal enterprises. Under this policy, the power enterprises in these provinces are compelled to use the coal produced from the same province as a first priority. Although Shanxi is a big coal producing province, local demand for coal is not high, a considerable quantity of its coal is sold to Henan, Hebei and Shandong and transported by land. Following the strengthened "Coal-Power complementary policy" of other provinces, it has proven more difficult for Shanxi to sell its coal. Additionally, lower-priced imported coal is impacting the Chinese domestic coal producers including Shanxi. As previously mentioned, most of the lower-priced poor quality coals are imported from Indonesia and Vietnam, and combined with the inflow of coal from Shaanxi and Inner Mongolia to Shanxi, the situation facing Shanxi has worsened.

Undeniably, China is a big consuming country of coal as reflected by the increase of net coal import quantity and the important role of coal in the power industry. Nevertheless, this doesn't mean that coal suppliers in China are doing gainful businesses. In contrast, the China coal industry is in a "winter" period. There are two main reasons for the suffering of China domestic coal suppliers. First of all, there are cheap and low quality coals imported from foreign countries such as Indonesia and Vietnam. In addition, the power plants are willing to use these imported coals as fuel for electricity generation. It is likely that the hardship encountered by domestic coal suppliers could be alleviated when there is more Government control on importing coal and the conflict between coal enterprises and power plants has been solved.