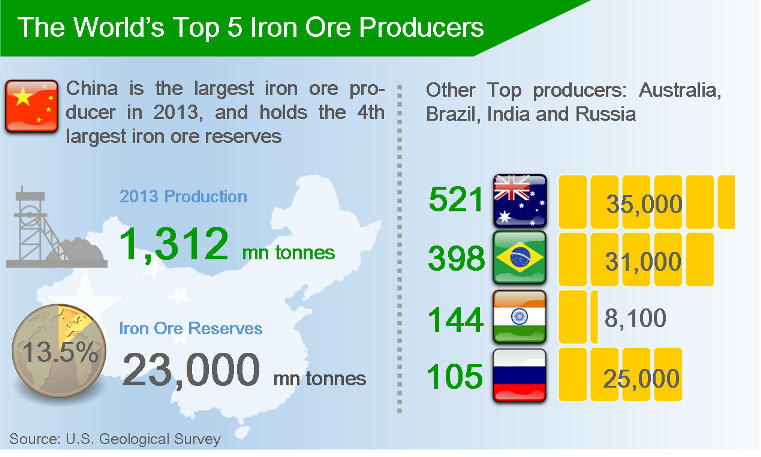 From Jan of 2005 to Nov of 2014, the price of imported iron ore in China increased from US$28.1 per tonne to US$73.1 per tonne as a result of a surge in iron ore demand caused by increasing steel production. China is currently the largest iron ore consumer in the world with its consumption representing almost half of global iron ore production. From 2004 to 2013, China recorded a 13.0% CAGR in steel production, far higher than the global growth rate. In 2014, it is estimated that China produced 810 million tonnes of steel and consumed 1,300 million tonnes of 62% Fe equivalent iron.

China is the world’s largest importer of iron ore, buying two-thirds of the world’s seaborne supply, in spite of its leading producer position. Chinese iron ore contains, on average, less Fe content (around 17-20%) than other major producers (with a standard of 62%). China’s iron ore reserves in terms of iron content is 7,200 million tonnes, representing only 8.9% of world total reserves. In 2013, 1,320 million tonnes of iron ore were produced in China, equivalent to only 325 million tonnes of 62% Fe grade iron ore. Consequently China needs to import iron ore to meet its massive demand.

Oversupply and declining demand lead to price drop in 2014

Rio Tinto (Rio), BHP Billiton (BHP), Fortescue Metal Group (FMG) and Brazil’s Vale S.A. (Vale) are major seaborne iron ore suppliers to China. Rio, BHP and FMG are all Australian based companies with iron ore mining operations in the country, making Australia the largest iron ore exporter in the world. In 2014, some of the biggest suppliers expanded their output and pushed the market into oversupply which led to a decrease of iron ore prices. The iron ore price at Tianjin port plunged to the lowest in five years at US$73.1 per tonne in November of 2014.

Although China saw a 14.7% year-on-year growth in iron ore imports in 2014, it recorded the first November decline in iron ore imports since 1998 in the last quarter. It is forecasted that China’s iron ore year-on-year import growth rate will drop to 6.4%in 2015. The growth will be driven by higher domestic steel output and demand. Real estate and infrastructure construction, machinery manufacturing, natural gas pipeline construction and shipbuilding activities are expected to be drivers for higher steel demand. The Deputy Secretary General of the China Iron and Steel Association forecasted that the iron ore price will stay in the US$70 -80 per tonne range in 2015.