The “Food Security” Concept Evolved since 1970

The term “food security” evolved in the mid-1970s at the time of a global food crisis. Primarily, it focused on food supply problems such as the assurance of availability of food and maintenance of stability of price of basic foodstuffs. As time progressed, the definition of food security has also been reviewed and redefined to fit with the changing circumstances. In 1996, new elements, such as safety and nutrition have been incorporated into the definition emphasizing their importance for maintaining a healthy population. Therefore, according to the World Health Organization (WHO), food security consists of three main components:

Domestic Food Supply of China has been Improving since 2000

As a country with a population greater than 1 billion, food security is always an important issue in China. In the past, China has had to deal with hunger problems due to rural areas of the country suffering from a food supply shortage. Nowadays, China needs to assure the self-sufficiency of its major food supply as well as meeting increasing demand for food as a result of economic growth.

Another reason that China’s domestic supply of food can accommodate the demand to a greater extent is the enhanced production capacity of cereal sowing areas. In the first place, the total area of cereal plantation (including rice, wheat and corn) has increased by 10.3% between 2000 (79.7 million hectares) to 2011 (87.9 million hectares) despite a decrease in total area during the period 2001-2003. Since 2006, the total sown area for cereal production was over 80 million hectares and this has continued to increase up to 2011.  Additionally, the production capacity of cereal-sown land has also improved. In 2000, the average production of cereal in a single hectare of sown land was 4,753kg. This increased to 5,707kg per hectare by 2011. The compound annual growth rate for the improvement in cereal land production capacity is 2.03%.

Although China has improved its arable land capacity and enhanced local supply of food, it only improves the food security standard from “suffering from serious food security problem” to “suffering from moderate food security problem” with regard to The Global Hunger Index (GHI). Consequently, China still needs to look overseas for supply of food. According to World Trade Organization (WTO) data, China’s agricultural product import value increased rapidly since 2000. Moreover, import value has also started to surpass export value since the same year. In 2011, the total import value was US$144.7 billion and the total export value was US$64.6 billion; the difference of US$80.1 billion is a record high in the past 30 years. For the trade of food products (excluded agricultural products), China has also transited from a net exporter to a net importer since 2008. From 2008 to 2011, there was a general trend of increased net import spending from US$13.6 billion (in 2008) to US$21.3 billion (in 2011). 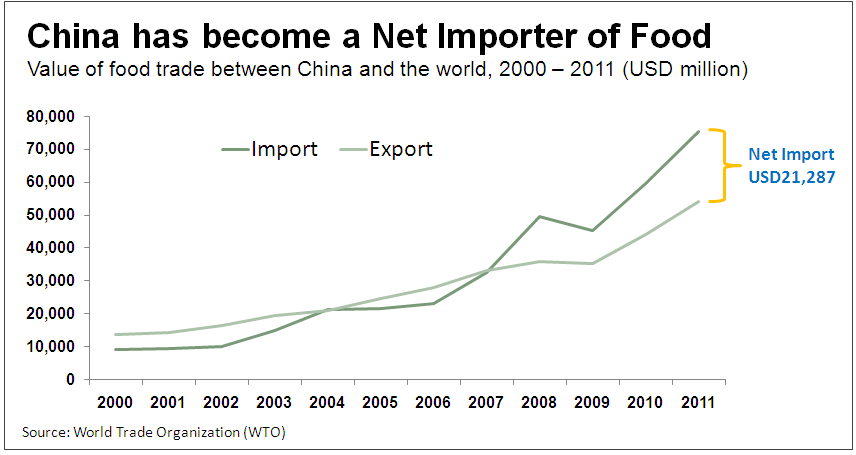 The improvement in agricultural capacity does not mean that China is able to be self-sufficient in its food demand in the long term and there is the need for China to look for overseas food supply to meet the increasing demand. This assumption is based on four factors below.

A detailed research report on this topic is available here