With the second largest population in the world and a growing economy, India is a big water consumer. However, as a result of limited water availability and poor infrastructure, India faces a number of challenges. The Water Security Index, created by the Asian Development Bank (ADB), gives India an overall score of 1.6 which is low compared to other Asian countries. Among the five components of the index India gets the lowest scores for household water security, urban water security, and environmental water security. This indicates that India suffers from serious water problems including: (1) poor ability to satisfy household water and sanitation needs, and poor ability to meet hygiene requirements for public health in all communities; (2) insufficient urban water-related services, such as water supply, wastewater treatment, and drainage; and (3) river basins that are in poor health.

The Gap between Wastewater Generation and Treatment Capacity

In the past decade, wastewater generation in India increased from 26,254 MLD (million litres per day) in 2003-04 to 47,459 MLD in 2011-12, with a compound annual growth rate (CAGR) of 7.69%. Although the quantity of wastewater treated increased with a CAGR of 10.85%, the level of wastewater treatment is still much lower than the generation level. In 2011-12, as little as 33.8% of wastewater discharged was treated. A government report, Urban and Industrial Water Supply and Sanitation for the Twelfth Five-Year Plan (2012-2017), identified that flawed planning for sewage treatment was a major cause of wastewater problems. The report summarized the major issues as follows: 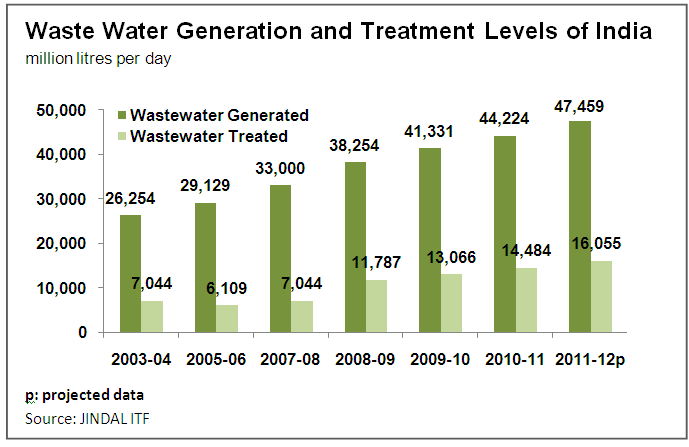 Industrial segment accounts for more than half of the wastewater market

A US government agency, Export.gov, estimated that the value of the India wastewater treatment market will reach USD3.25billion by 2030. In accordance with this projection, Censere has identified several possible drivers for the growth.