Censere takes a look at changing environment for FDI in infrastructure.

The development of infrastructure in the Asia ex-China region has undeniably lagged behind the strong economic growth in the region.

The projected growth for the coming decade has put infrastructure investments on the radar of foreign investors who eye it as a “Trillion Dollar Holy Grail”.  However, the question remains whether foreigners can participate and capitalize on the “brick-building” of Asia.

The Asian Development Bank estimates that USD$8 trillion will be invested in the region from 2011-2020 and that approximately 10% of these projects will involve FDI; with the remainder coming from public finances or local banks.

Of the total, 80% will be earmarked for China and India.  Both countries are heading the infrastructure boom in the region and most will be invested in energy and roads. 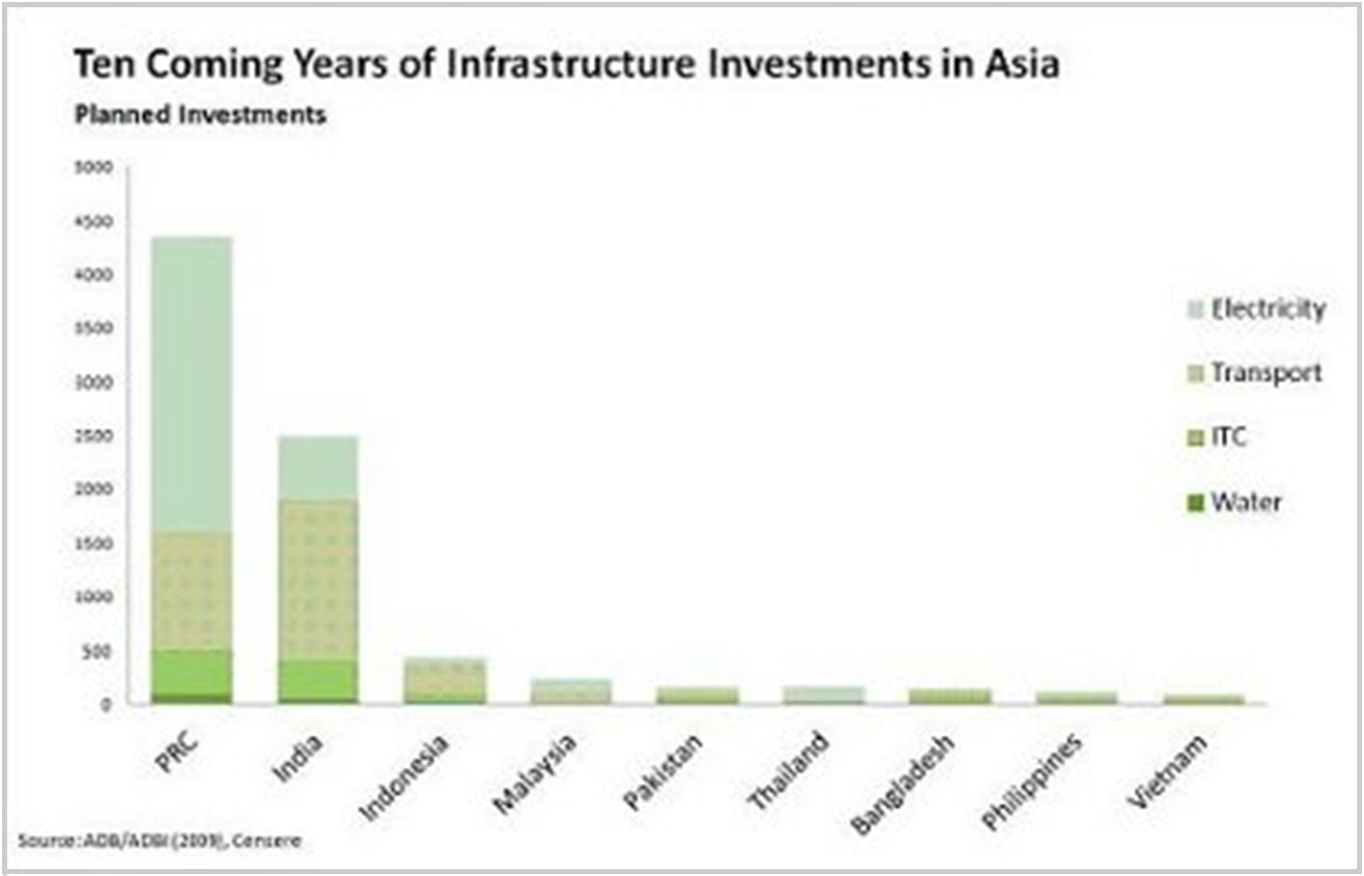 Foreign infrastructure investors that Censere have talked to perceive China as a closed market, with self sustained financing and operating capabilities, China has the balance sheet to pay for its own roads and power plants.  The policy put forward by China is to protect infrastructure developers, who are often quasi SOEs, from foreign competition.  This allows them to develop skillsets that can be exported to other countries in exchange for favorable investment terms, commodities or a combination of other goods and services.

Given the market conditions in China, foreign investors are looking towards the rest of Asia for better ROI alternatives.  Markets like Malaysia and Thailand fall under the same umbrella as China; both possess the same financial and operating capabilities needed to sustain the growth in domestic infrastructure investments.

India
India’s Prime Minister Manmohan Singh plans to spend USD$514 billion on infrastructure projects over the next 5 years.  With current local players being stretched thin, both in terms of capacity and financing, the general consensus in India is an acknowledgement of the benefits that FDI and foreign operators bring.  This has spurred innovative financing terms allowing private companies to issue infrastructure bonds and other forms of financial instruments.
To improve investor confidence, layouts for Public-Private Partnerships (“PPP’s”) agreements have been heavily modified to meet foreign investment criteria.
No matter how advanced and sophisticated the new PPP models are, there are still substantial hurdles left unaddressed.
Namely:
These three factors create unpredictable costs and delays which both impact significantly on ROI.

Indonesia serves as another prospect for infrastructure investments.  Economically, Indonesia has reaped the benefits of an increased appetite for commodities in the region and is now looking to invest in its neglected infrastructure. Indonesia has, like India, reformed their PPP structure.  Also, big ticket names like Gita Wirjawan are allocating resources towards infrastructure projects in Indonesia to help instill investor confidence within the local infrastructure sector.

Valuation mismatch in the region

A common denominator for Indonesia, India and other markets in Asia is the valuation mismatch between the different stakeholders in the region.The valuation gap is broadly caused by different expectations in regards to interest rates, rising inflation and a lack of proper frameworks for debt allocations.  Additional factors include; problems of land allocation, bureaucratic application processes and operational problems causing delays and other hurdles.
Infrastructure Debt Funds (“IDF’s”) are being launched by the Indian government to tackle some of the problems stated above.  IDFs are among several strategies launched to tackle the hurdles and foreign investors are seeing improvement.

Indonesia appears to be learning from India’s mistakes; leapfrogging their PPP structures, mimicking regulations and taking the best approaches to infrastructure investment from both China and India.Risk mitigation is also problematic for foreign investors given the strong regulations around currency exchange, particular in Vietnam.

IDF’s are often set up in local currencies, adding to the capital cost of a foreign investor looking at minimising currency risk in countries they are operating in. With an inefficient regulatory environment, non transparent financing and unknown risk factors facing infrastructure investors in the region it becomes essential to ensure that their interests are aligned with that of regional stakeholders to achieve success in the sector.

There are many options for structuring the financing of a project.  These options include debt financing, equity or a combination of both.  Budgeting for lobbying and partnering with NGO’s is often crucial to achieve success now that infrastructure investment involves all stakeholders in society.