Mongolia is one of the major coking coal producers

By the end of 2011 total global proved recoverable coal reserves stood at 982,744 million tons. Europe (30.8%) and North America (27.5%) held the major recoverable coal reserves. At the country level, USA, Russia, China, Australia and India held the largest coal reserves and,in aggregate, held around 72.4% of the world’s total recoverable reserves. Mongolia has also proven to possess vast resources of coal. According to the Mineral Resources Authority of Mongolia, coal deposits can be found throughout the country.

Mongolia only began to tap its vast coal reserves in the past five years. Before 2008, the annual coal production of Mongolia was less than 10 million tons, although continuous growth was recorded. However, significant year-on-year changes were recorded for three consecutive years from 2009 and production reached a record high at 32 million tons in 2011. 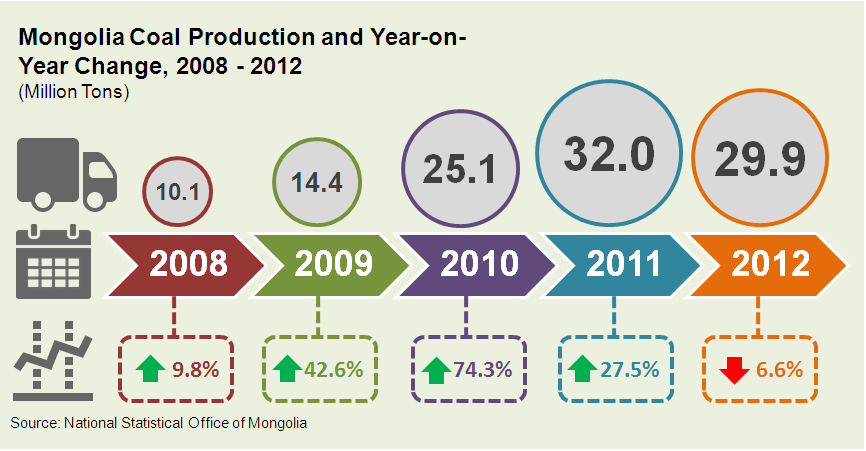 In Mongolia, the consumption of coal has only recorded moderate growth during the past decade. The volume of consumption increased from 5.2 million tons in 2004 to 7.4 million tons in 2012, with a 4.51% compound annual growth rate. In 2012, around 24.7% of coal produced was consumed domestically. It is reported that the vast majority (79.0%) of domestic coal consumption in Mongolia is due to  “Thermal power stations”. The “Utility services, household consumption” and “Manufacturing &construction” sectors accounted for 9.4% and 3.0% of consumption respectively.

China is the most important destination for Mongolian coal

Currently, China is the largest buyer of  Mongolian coal and Mongolia has become one of the largest suppliers of coking coal to China. In 2012, Mongolia exported around 2.0 million tons of coking coal to China, following Australia which exported around 2.5 million tons. Lower prices is a key reason that China imported a huge amount of Mongolian coal. For example, the average import price of Mongolia Mining Corporation’s (MMC) washed coking coal was USD155/ton in 2012, USD60 less than the Chinese domestic price and USD114 less than imported coking from other countries.