Energy demand is projected to double in Asia-Pacific by 2030.  Accordingly, there is an urgent need for new and innovative ways to generate power and reduce greenhouse gas emissions.  Solar energy has long been singled out as one of the strongest contenders amongst renewable energy sources. 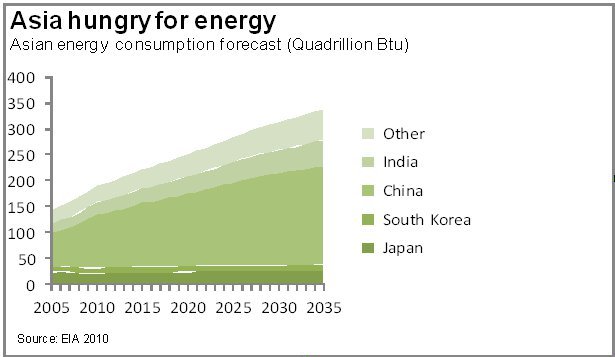 Several technologies are currently being tested, but two forms have been commercialised for converting sunlight directly into electricity and now dominate the market:

1) Solar Photovoltaic (“PV”); also known as solar cells with several cells making up a solar panel.  The cost per watt has been recorded at rates as low as US$1.6 down from U$3.00 in 2008.  Estimates point towards prices reaching levels lower than US$1.5 by the end of 2011. US$1.00 per watt is the estimate for a price level encouraging mass adoption of PV technology, making it competitive with coal and gas on a non-subsidised basis.

2) Concentrated Solar Power (“CSP”); a system that uses lenses or mirrors and a tracking system to focus a large area of sunlight into a small beam.  The beam is used to heat a working fluid to power something similar to a steam based system.   The cost per watt varies as each power plant is unique and they are often custom made. Reportedly, some plants have achieved costs below US$1.5 per watt;   though this remains to be proven by the solar research community.

The two technologies are battling it out to become the global industry standard for solar power.  Two markets play a crucial role in this battle; India and China.

India is the leading adoptor of CSP technology in Asia.  With future concerns around energy security and climate change, the Government has introduced incentives towards a heavy adoption of solar power.  In July 2009, India unveiled a US$19 billion plan to generate 20GW of solar power by 2020.

Examples of Indian companies investing in this field include:

The Industrial Development Corporation is installing a 10MW solar thermal plant in Nagpur.

The India based ACME Group signed a 1GW licensing agreement with eSolar for US$30 million for development projects in Asia.  In January this year, seven developers entered into agreements to supply 470 MW of CSP-generated power via three 100 MW plants, three 50 MW plants, and one 20 MW plant.

A large PV power plant installation was planned but cancelled due to lack of competitiveness when benchmarked to CSP.  A 112.1 MW facility had been planned, but most of it has been cancelled during recent years.

Micro PV modules on the other hand are widely adopted among rural homes with no access to the National Energy Grid (“NEG”).  MW Capacity in this market is unknown but insignificant when benchmarked against CSP in India.

China is the world leader in manufacturing and exporting PV technology.  Domestic demand for the technology remains small, with over 95% of the PV cells produced exported to the West.  In 2009, China’s cumulative PV installed capacity was 305MW.  Of this, 40% was for rural cities with no access to the NEG.  To promote the use of renewable energy, China introduced the Renewable Energy Law, which came into effect on 1 January 2006.

An amendment to the law provided power grid companies with revenues for purchasing clean power generated from the surcharge on retail power tariffs and set a minimum target for the amount of electricity that the grid companies must buy from renewable energy projects.

China has set goals to raise the share of renewable energy in total primary energy consumption to 10% by 2011 and 15% by 2020.  Building-integrated PV systems, as well as large PV installations in desert areas, are being encouraged by the government, which began providing a subsidy of CNY20 (USD$2.93) per watt, for building-integrated PV projects in early 2009.  It is likely that the national targets for PV technology – 400 MW in 2010(not reached, only 366MW) and 1,800 MW in 2020 – announced in 2007, will be significantly increased.  Experts predict that China's installed capacity could reach 1 GW in 2012 and 20 GW in 2020.

In 2010, the government carried out two rounds of bidding for PV projects.  The first round added 10 MW at one location and the second added 280 MW at 13 locations.  The selection of the bidder was based on the price of electricity offered.  The bidding was highly competitive and the announcement of winning bidders indicated a price range of USD$0.11 – $0.16 per kilowatt-hour.  It is understood that the low bids prompted internal discussions, since many feel that the rates are not sustainable and may be harmful for the domestic solar industry.

The Thai Government has developed an Alternative Energy Development plan –  2008-2022, which aims to have 20.4% of the energy mix come from Renewable Energy.  This translates into 550MW of solar capacity by 2022.

The Ministry of Energy is promoting decentralised power generation, mainly by supporting

the country’s Small Power Producers (“SPP”) and Very Small Power Producers (“VSPP”) programs. The SPP program allows private developers to build, own, and operate 10–90 MW power projects and to enter into power purchase agreements with the Electricity Generating Authority of Thailand.  Solar energy projects originally received a subsidy of THB8.0 (circa USD$0.23) per kilowatt-hour, for 10 years from the start of commercial operations.  This fell to THB6.5 (circa USD$0.19) at the end of 2009.  The solar subsidy has been hugely successful with over 1,500 MW of signed power purchase agreements implemented since its inception.

The government is no longer accepting new proposals under this scheme.

While Thailand intends to increase its share of solar energy generating capacity, the domestic solar energy market remains divided over the use of technology.  Currently, most existing solar plants in Thailand use ‘flat-plate collector’ PV panels.  However, there are clear indications that many of the proposed plants are based on various concentrating solar thermoelectric power technologies.

Realising the potential for the solar energy business, some established CSP players have already entered into Thailand to develop projects on a range of scales.  For example:

Sopogy, Inc., the world’s leading developer of micro concentrated solar power technologies, recently signed a Memorandum of Understanding with MAI Development Co. Ltd., for the development of a 6MW solar power plant in Bau Yai, Nakorn Ratchasima Province, to provide electricity to the Provincial Electricity Authority of Thailand (“PEA”) in 2012.

Solarlite's Kanchanaburi project, currently being commissioned north-west of Bangkok, underwent its first test at the end of September.  It will be the first commercial parabolic trough plant in the world to use direct steam generation to achieve an output of 5 MW.

Similarly, GE Energy plans to introduce its cadmium telluride thin-film photovoltaic technology to the Thai solar-energy market within the next two years.

While the current scenario in Thailand clearly seems divided on the use of technology within solar energy, the promotion of solar power in that country will likely bring opportunities for the CSP market in the coming year.

In Bangladesh, a number of domestic solar energy systems are currently used in houses.

The use of solar energy on this scale is advantageous, as over 50% of homes do not have access to electricity from the NEG.  The Government has emphasised the development of solar homes under its Bangladesh Climate Change Strategy and Action Plan.

This plan has set up a specific program for solar energy development, with the government exploring an incentive scheme to encourage entrepreneurs who wish to start solar projects. Potential applications of solar energy for industrial and agricultural uses could also be examined.

The government endeavours to reach a minimum level of 10% of the NEG using non-conventional renewable energy by 2015 and 6% of households using off-grid electricity systems by 2011.

The 10-year horizon development framework of the government, which started in 2007, emphasises the sustainable development of energy sources and delivery systems and the setting of competitive prices.  It targets increasing fuel diversity and security through investing in both conventional sources and non-conventional renewable energy.  The grid and off-grid energy systems are planned to ensure access to electricity for 98% of households by 2016.

The Government of the Maldives has a clear strategy to expand solar PV power generation to incorporate more reliable and sustainable means of electricity generation into the existing power system.  Presently, the Maldives is dependent on diesel to provide electric power to island communities.

Support can be provided to solar technology solutions to reduce the dependence on diesel, increase the proportion of renewable energies, reduce the import of diesel and enhance the energy security of the country.

Pakistan has set a target to add 5% (about 10,000 MW) of electricity through renewable energies by 2030.  In July 2009, the government announced that 7,000 villages would be powered using solar energy in the next 5 years.  The Punjab provincial government is also targeting new projects aimed at power production through coal, solar energy and wind power.

The Fukushima incident has put Japan’s dependency on Nuclear Power in question.  There is current political turmoil around Japan’s aggressive energy expansion plan which is being reconsidered by several parties.  Entrepreneurs have wanted to build large PV power plants around the NEG to remove the dependency on nuclear power, however, incentives and restructuring of the energy market in Japan is an ongoing bureaucratic battle.

Censere will provide an update on Japan in a special issue once more details about emerging plans are formed by the current government of Japan.

China, India, and Thailand are the three biggest Asian markets for solar power investments (ex Japan and Korea).  CSP is poised for growth in both India and Thailand and experts are speculating on CSP becoming the standard for the region.  PV cell prices are falling aggressively and if it falls below USD$1 per watt before 2015, PV might become the standard for solar power plants.