The Changing Face Of IP In China

Western executives have spent the last decade worrying about the threat of competition from China due to its access to cheap labour. Having been the home to manufacturing factories for companies like Apple, China’s competitive strategy up to now has been to compete on price. The current trend is leaning towards the next Apple being born in China due to the rapid increase in innovation and China’s desire to move up in the value chain – going from being a manufacturer of products to the inventor of the products.

Patent application has been an indicator heavily used to track innovation. It is no hidden secret that Chinese patent applications have now surpassed both Japan and the US due to its impressive 30% annual growth rate (vs Japan’s 4% growth rate). 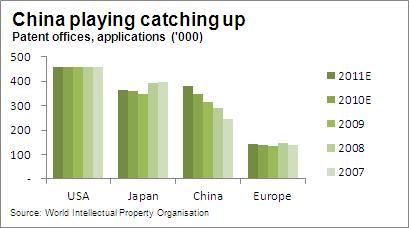 The problem however with using patent application numbers as an indicator of innovation is misleading due to these three factors:

However it is dangerous to dismiss the idea of China potentially becoming a legitimate patent powerhouse; there are early signs of a rapidly maturing market for IP. The high application number reflects Chinese firms starting to respect international IP regulations and the commitment it entails.

An example supporting this hypothesis is the ongoing international IP litigation between two Chinese companies; ZTE and Huawei, two companies with headquarters close to Shenzen. They are also a prime indicator of firms driving the heavy growth in patent application coming from China given their increase in R&D spending by 30-50% during the recession vs their Japanese counterparts who cut spending by more than 10-20%.

The growth in patent application is greatly encouraged by the Chinese government due to the $10 billion annual spending on foreign royalty and licensing agreements.

As a part of the five year plan the Chinese government wants to achieve two goals:

These factors will change the Chinese IP market and its current dependence on foreign IP. Combined with its enormous potential for becoming the worlds biggest consumer market, every executive nowadays is asking themselves if they can afford not being in China? The trend has lead to a explosive growth of foreign owned R&D centres in China.

When contemplating ways of implementing an IP/R&D strategy for China several pathways can be considered: ranging from a fully owned Chinese subsidiary, commissioning of a research institute on a project basis, JV with a Chinese company, or partner with Chinese Academia. Whichever option chosen requires several considerations in terms of financing, technical research and due diligence.

In essence understanding China requires and understanding of where China has come from, where it is now and where it intends on being 20 years from now in order to interpret the future challenges and changing policies in China.

Contact Censere for in-depth analysis regarding IP in China.