The Consolidation of China’s Dairy Industry 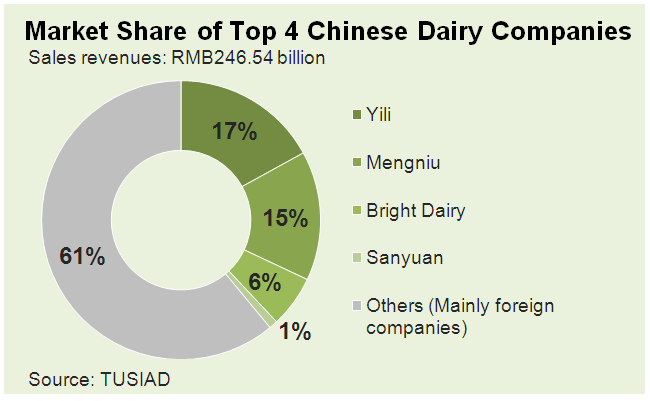 On basis of company sizes, market players in the Chinese dairy market can be categorized into 3 tiers. The 1st tier refers to the national players, namely, Mengniu, Yili, and Bright Dairy. The 2nd tier includes regional players, such as Beijing Sanyuan Dairy, Royal Dairy, and Yantang Dairy. The 3rd tier players focus almost solely on local markets and pose no immediate threat to players in the first two tiers. There are more than 1,500 dairy companies in China, while the number of companies with operational revenues above RMB5 million is more than 400. In 2012 the dairy industry reported sales revenue of RMB246.54 billion, the top 4 dairy companies were all domestic companies and merely accounted for around 39% of market share. Foreign dairy companies, such as Danone, Mead Johnson, and Nestle, made up more than half of the market.

After the melamine incident in 2008, the Chinese government has been endeavouring to restructure the domestic dairy industry. The country is planning to create a few national dairy heavyweights that control the production of milk powder, infant formula, and raw milk, as well as a greater proportion of dairy-product processing. The “Proposal to accelerate the consolidation of milk formula industry”, jointly released by the MIIT, NDRC, MOF, and CFDA in June of 2014, proposed the establishment of 10 milk formula groups with respective annual revenue of over RMB2 billion and raising industry concentration of the top 10 domestic brands to 65% by end of 2015. Moreover, the proposal also aims to create 3 to 5 large infant milk formula groups that each have an annual revenue of more than RMB5 million, and to further increase market concentration of the top 10 domestic brands to 80% by 2018. The new policy is an extension of the “Double lifting” policy proposed in 2013.

In May of 2014, the China Food and Drug Administration released the results of a six-month review of the infant-formula industry, issuing production permits to just 82 of the 133 companies that submitted applications. The Ministry of Industry and Information Technology announced its intention to shrink the sector to 50 manufacturers by 2018.

As the dairy industry continues to consolidate, the number of deals in the industry is accelerating. In 2013, there were about 10 M&A deals, with a total value of USD3.2 billion. In first half of 2014, the industry had 15 deals, totalling more than USD2 billion. Some major recent transactions are listed in table 1.